After only seven months of marriage, and after announcing they are expecting a child together, Keshia Knight Pulliam and husband Ed Hartwell have filed for divorce. It appears that Hartwell might also be questioning paternity of their child.

Pulliam and Hartwell Divorce After 7 Months

As Pulliam explained on her podcast Kandidly Keshia, “We [got married] literally in our living room in our home. We come from large families. I’m one of four, Ed is one of six. We invited people. They had no clue they were coming to a wedding. They thought they were coming to a New Year’s party.”

Earlier in July, Pulliam announced the couple’s pregnancy via her Instagram account, captioning the photo of her baby bump with: “Surprise!!! We have a new addition coming soon.” As she explained during her podcast: “She is so spoiled already! It’s funny, though — literally she visited me in my dream about over a year ago and I can see her face as clear as I am looking at you right now. It was the most surreal experience of waking up and knowing that was her. I knew I was going to have a little girl first.”

It appears that Hartwell is skeptical about if he is the father or not. As he told TheYBF.com via his rep, “Right now, the only thing I want is a paternity test for the baby.”

There are numerous reasons for why you would want to prove the paternity of your child’s father. Not just for you – to seek child support – but also for your child. Being able to prove paternity can mean the difference between your child receiving legal right to death benefits such as social security or Veteran’s benefits, or possible inheritance – in the event of the birth father’s death.

Paternity is defined as: the state or condition of being a father. This type of action arises when the parties, who were never legally married to each other, are the parents of a child. Either the mother or the father of the child may file the Petition to Establish Parental Relationship of a child. Once paternity is established, the court will make decisions on the issues of child custody, child support, and child visitation.

Below we go into specifics about the importance of establishing paternity – not just in cases of divorce – but for all other reasons, as well as how to establish paternity. We then will discuss parental rights, and the forms of child custody. When it comes to child custody cases, you might need to be able to prove paternity in order to receive custodial rights.

There are various other reasons for why a paternity test may be ordered, including the following:

A mother seeking child support compensation will need proof a certain man is the actual father of a child, especially if he denies it. A decision on paternity can be especially necessary when a mother is seeking and applying for state aid to raise her child. A majority of states refuse to offer child financial help unless a mother has already sought the help of child support payments from the child’s father.

If you are a man, and have been sought out for child support payments because of a child you may or may not have fathered, it’s important to know that most states have measures in place to track down fathers that cannot be located and who may be avoiding paying child support by making claims they are not the father. Once a man is located, a court will issue a paternity test to determine if the man is the father, and thus, needs to supply child support aid. 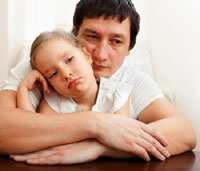 There are many claims about at-home paternity tests, but only tests taken in court-approved locations can be deemed as legally official. Results of home testing kits are not accepted in court. Paternity law requires that only an approved official, such as a laboratory employee, can collect DNA. Neither parent is allowed to handle it (as would usually be done with an at-home test) in order to prevent possible tampering.

Because parents are often unmarried at the time of conception or birth of a child, a paternity case might need to be opened in order to establish paternal rights. These types of cases can be complex, so it might be in your best interest to consult an experienced attorney.

California Family Code section 7570 states “there is a compelling state interest in establishing paternity for all children.” This is because “establishing paternity is the first step toward a child support award.” Paternity is used as basis for child custody and visitation orders. Conclusive determination of the father and mother of a child are needed for: medical diagnosis, health insurance, social security, military benefits, and inheritance rights. The code states, “knowing one’s father is important to a child’s development.” Family court judges always have a child’s best interest in mind when determining rulings on child support and child custody and visitation cases.

Under California Family Code section 7571, the man the mother identifies as the father at the time of the birth has the opportunity to complete a voluntary declaration of paternity.

In Brown’s case, because Riesling was declared as the father at the time of the child’s birth, there will need to be legal amendments made for Brown to be able to claim Royalty as his own. It is important that Brown be declared as a father to the child should Brown seek legal custody of the child.

This is why paternity is important to establish. Paternity must be established if you are seeking full custody.

Full child custody, also known as sole custody, means all legal parental rights are assigned to just one of the parents. There are two kinds of “sole” custody:

Most family law courts award joint custody, because it has been found to be in the best interest of a child to be raised by both parents. Usually when a parent files for sole custody it is because they see the other parent as unfit to take care of the child. This can be for various reasons, including: inability to provide for child, abuse, or a history of abuse or addiction.

Seeking full custody can be difficult if you are unable to prove that the other parent is unfit. There are some steps you’ll want to take:

Working with a Family Law Specialist