When Todd and his wife Mary decided to get divorced, their marriage had already been struggling for years. He worked too much, she didn’t work and the time spent being apart had bred resentment and anger. Their divorce settlement would not be arrived at without bitterness and anger.

Todd and Mary had met right out of college through mutual friends. They actually weren’t really interested in each other at the beginning. But one night, something had changed: she had stood up for a friend. All the other girls in their group had been talking behind the girl’s back and Mary had put an end to it. Todd was intrigued by this girl who hadn’t stooped to the level of the others. He had asked her out that night. And they were married three years later.

It was just after their second daughter was born that Todd had started working at the print shop. He had started as a project manager and quickly, over a two year period, risen to become a manager of his department. With it had come a sizable raise. When their third daughter arrived, Todd and Mary were sitting on a very solid financial situation. So much so that Mary was able to quit her assistant job. They were happy.

The trouble started just after their youngest daughter had turned 11. Todd had been unable to attend her birthday party because he had had to work. This was not the first time Todd had missed an important family event because of work. In his mind, this is what he had to do to support his family. He, of course, wanted to be there for every event, but there was no way the events would be able to happen if he didn’t do his job. It was a double-edged sword. Mary was sick of it. She saw no reason for why Todd couldn’t delegate to other people. He was a manager after all!

They had fought the night after the party, when Todd finally returned home. Up till now they had been able to shield their daughters from their fights by keeping them behind closed doors. This time their shouting had been so loud it had woken up their now 12 year old daughter. Things were getting worse. And they weren’t going to get better.

They could go for months at a time without fighting, but something would set them off – Todd would need to work and would thus miss a family event. Mary felt as if she was raising the children on her own. They’d fight, make up, fight, make up. But nothing seemed to be working for them.

A year later, Mary asked for a divorce, permanent alimony, and full custody of their children.

They both knew that reaching a settlement would not be easy.

Divorce is when two spouses determine to dissolve their marriage. In the state of California it is often called a “dissolution of marriage.” In California, which is a “no fault” state, from the court’s point of view there is no “guilty” or “non-guilty” person and a court does not look for a reason for the divorce. When filing in California, “irreconcilable differences” is the standard reason cited for filing divorce. This means you and your spouse are unable to work out the issues of your marriage and will never be able to. During the process of divorce, your legal status is returned to “single.” But many other things must happen before you do that.

During the divorce process, you must resolve what will happen with your shared property, including your house, your financial situation, including shared bank accounts and shared debts. A divorce settlement may stipulate that one spouse takes over the auto loan payments while the other spouse takes over paying the mortgage. You will need to separate these items in order to financially separate yourself from your spouse.

During the divorce process you also need to resolve child custody and visitation if you share children. This includes working out a co-parenting schedule that includes weekly schedules as well as holiday schedules.

In cases like Todd and Mary’s, where Todd has been the financial breadwinner, Mary would be legally able to ask for alimony, or spousal support payments. In the state of California, it used to be common for the spouse that had a smaller income to be given permanent alimony after a long-term marriage. That is no longer the case.

The current standard is rehabilitative alimony, during which the person with the lesser financial standing receives spousal support payments for a certain amount of time while he or she actively searches for employment or other means of “rehabilitation.” This can often mean taking college courses to learn a marketable skill.

A number of factors can reduce the level of payments in a permanent alimony agreement. One example is if the spouse that receives the alimony gets a job in which he or she make significantly more money than they did previously, the spousal support payments can be cancelled by a divorce court. In cases where the paying spouse loses his or her job or receives a salary reduction, the alimony payment amounts may be reduced. Other factors can be inheritances awarded to either spouse, remarriages, and death of either spouse.

If you share children, you will also need to work out an arrangement regarding child custody and visitation, in addition to child support. 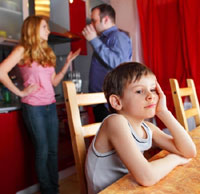 There are various types of child custody: physical and legal, sole and joint.

Physical Custody: a parent has the right to have a child live with him or her.

Legal Custody: a parent has the right and the obligation to make decisions about a child’s upbringing.

Sole Custody: a parent has either sole legal custody or sole physical custody of a child. Typically sole custody is only awarded to a parent if the other parent has been deemed unfit because of alcohol or drug dependency or charges of child abuse or neglect.

Joint Custody: when both parents do not live together but share the decision-making responsibilities for, and/or physical control and custody of, their shared children. Joint custody can be:

Another type of custody arrangement is called “bird’s nest custody” or “nesting.” This is when the children stay in the family home and the parents take turns moving in and out. During the time away from the children they live in a separate apartment or home of their own.

Child visitation, custody, and child support can be very difficult to resolve without the help of a lawyer if both parents are resistant to coming to an agreement.

Working with a Divorce Legal Team

Divorce can be overwhelming for so many reasons, not just emotionally, but also financially, and legally. You will want to work with a certified family law specialist like the ones at the Law Offices of Korol and Velen, Certified Family Law Specialists. If you are facing a divorce, you should work with an attorney that will take a vested interest in your specific situation and advise you on what you might face in a divorce regarding property division, child support and custody, and alimony. They will be able to advise you on your options. An attorney will provide support and guidance as you work towards ending your marriage.