It appears that there’s been an uptick in “gray divorce” – a nickname given to divorce after 50. But what’s the reason behind it?

After being married for thirty years, a couple decides that it’s time for a divorce. Sounds odd? Well, these “gray divorces” are actually happening more often.

According to the National Center for Family and Marriage Research at Bowling Green State University in Ohio, in 2010, one of every four divorces occurred among the 50 and older population. And in 1990, the 50+ group was more than twice as likely to be divorce.

So what are the reasons behind why people are divorcing later on in life?

According to Stan Tatkin, author of Wired for Love, there’s no one big event or trigger that sets off a gray divorce. Instead, it’s a process that happens over time. “It’s like an unbreakable plate you drop repeatedly,” he says. “The relationship develops microcracks inside the structure you can’t see. Then it finally reaches a critical mass and shatters.”

Dissatisfaction can occur for any number of reasons. According to Tatkin, there are a number of prevalent themes that lead to divorce “Often one person — usually the woman — feels she’s given up too much. She may have put aside her career as she raised the children. She feels the wear and tear of the relationship because it wasn’t collaborative.”

As we all know from the middle-aged guy driving around in his new Corvette, to the middle-aged woman who is seemingly going in for yet another procedure, hitting the “middle-aged” mark can lead to feelings of wanting a “reboot.” According to Tatkin, people go through physiological and biological “brain upgrades.” These can happen at various times within a life, including at age 15 and again at 40. “Every time you experience one you want to go back [in time],” he says.

When these cravings for returning to younger years occur, a lot of times that means growing apart or seeking out new relationships.

Steve Siebold, author of 177 Mental Toughess Secrets of the World Class and a psychological performance and mental toughness coach believes boredom is a factor. “Being around the same person 24/7, depending on the relationship, can lead to boredom,” he says. Sometimes people just give up trying. “You work hard, play hard and take care of business, but you’ve stopped being the attentive, attractive spouse. You’ve allowed yourself to become complacent.”

Money issues are difficult for everyone, adding stress to any relationship. Additionally, differences in spending habits between couples and having to deal with those habits over the years can reach a breaking point. If one spouse is a big spender and the other likes to save, it can be very difficult to align the differing points of view, and maybe completely impossible. “The kids’ activities, expenses and college funds eat the family’s discretionary cash and you’re deep in debt,” says Siebold.

Steps of the Divorce PRocess

Whatever your reason for considering your gray divorce, there are set steps you will need to take to get divorced. Hence, we bring you a “how-to” for getting divorced. 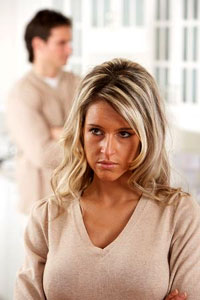 To start the divorce process one of the spouses must file a petition. Even if both spouses are in agreement, one of them will have to file a petition with the court asking for the divorce. This petition states the grounds for the divorce. These vary from state to state. California is a no-fault state, meaning no fault is placed on either party regardless of infidelity, etc… All jurisdictions allow for some type of no-fault grounds such as “irreconcilable differences.” Some states will consider fault grounds for divorce, such as adultery or abandonment. Your attorney will be able to advise you on if fault grounds are available in your state, and if so, whether or not it makes sense to file for divorce on fault grounds.

2. Temporary Orders for Support and Custody

3. Proof of Service and Response

When two divorcing spouses disagree on issues they must come to an agreement that settles their differences. Often times this is done through mediation. During this process every aspect of a marriage is resolved: child custody and visitation, child support, property division and any spousal support. Working with a mediation specialist can help you receive the settlement you are seeking when it comes to dissolving your marriage. It’s within your best interest to try and resolve all these issues outside of court. This will cut down on legal fees, time spent arguing, and any headaches that can come with trying to go back and forth to find an agreeable settlement. Any issues left undecided during the mediation process will have to be decided at a trial.

One of the hardest steps of a divorce is the “moving on” step. Once all the dust is cleared, all the paperwork signed, you now find yourself entering the “single” box on your important forms. Rather than view this in sadness, there are some ways to look at your new life with hope and excitement. It’s up to you how you will tackle each day.

Working With a Divorce Advocate